Wincle Men’s Applications for Exemption from Military Service – June 1917 onward
Meetings of Cheshire War Agricultural Committee
The War Agricultural Executive Committees were government-backed organisations tasked with increasing agricultural production in each county of the United Kingdom during the First World War; they were established in autumn 1915. Their remit included ensuring there was sufficient labour on the farms and a special Labour Sub-Committee was set up to oversee this aspect of the war effort. Their powers were specifically (see ”Review of the Work of the  County War Agricultural Committee“, ref CRO*CCC 1/4/1/1/1 pp4-5):
15) To organise and deal with all forms of Labour in the County, i.e. soldiers, prisoners, volunteers &c.
16) To virtually act as recruiting authority so far as regards Agricultural Labour and Allied Trades and to issue Vouchers to men essential to the land and investigate all cases of men applying for such Vouchers.

When conscription was introduced in January 1916 it was the job of Military Service Tribunals to deal with the many requests for exemption (by June 1916 the number was almost as many as had joined up in the same period). Men could apply on the grounds of their doing work of national importance, business or domestic hardship, medical unfitness, and conscientious objection. Most men were given some kind of exemption, usually temporary (between a few weeks and six months) or conditional on their situation at work or home remaining serious enough to warrant their retention at home, and that applied particularly to farm workers, especially where there was an only son.

In June 1917 the Labour Sub-Committee ”became responsible for the vouching or otherwise of the men of the land and which men were not to be taken by the military authorities without the consent of the Committee.“ (Ref: CRO CCC 1/4/1/1/1 pp10-12). So whilst the actual Military Service Tribunal reports have in most cases not been preserved (in fact, they were deliberately destroyed) we are fortunate in Cheshire in having some records for the Labour Sub-Committee which list the men who applied for exemption from June 1917 onwards. The list specifies their home town or village and usually the farm they were employed on. In most case the committee supported the case for exemption, though occasionally they would demand the applicant worked on another farm as well for a few days a week or be trained and employed at horse-ploughing (where there was an acute skill shortage). Even so the Committee still had to find 1000 men that could be spared from agricultural work. The committee had only three weeks to deal with each case (ref: CRO CCC1/4/2/1, July 13, 1917 p6). On the next page I have listed all the men that came from Wincle (and in one case, Higher Sutton) who applied for exemption from June 1917 onwards, together with the action decided. These are listed in the minutes of 1917 onward – refs CRO CCC1/4/2/1-4).
No names were found in the earlier minutes, pre 1917 (ref CCC1/4/1/1) so the list is necessarily incomplete. 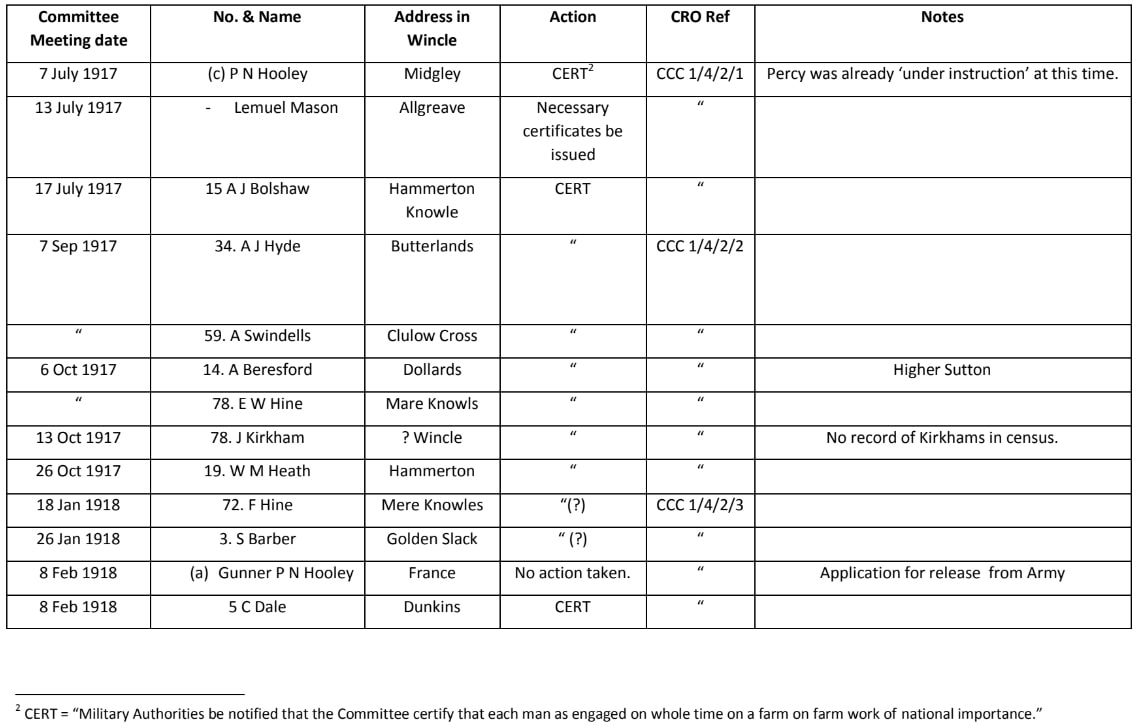 The case of Percy Hooley is interesting in that he was already in army training when his application for exemption was dealt with on 7 July 1917. Despite the committee certifying him as required for farm work he stayed in the army. He applied a second time, this time to get out of the army in France, on 8 Feb 1918, but this time the committee didn’t support his application, perhaps because they were under obligation to provide me for the forces as well as
agriculture.

The exemption of Arthur Bolshaw of Hammerton Knowle ties in nicely with other, circumstantial evidence. Thelma Rutherford, daughter of William Brown of Long Gutter and who served, has a photo of Arthur in a civilian suit, sent to his friend William in army training in Lincolnshire. It is also interesting that two Hine brothers, Ernest William and Francis George, were both approved for exemption at Mare Knowles Farm. Their father was still farming at Mare Knowles in 1914 and was only 63 when he died in 1928.